I know, I know, I should stop buying books.  But there are just so many! I’ll include Goodreads, The Book Depository and Amazon links with each book. Since some of these books are sequels I’ll include the first book’s ‘blurb’/summary instead of the actual books summery to avoid spoilers. 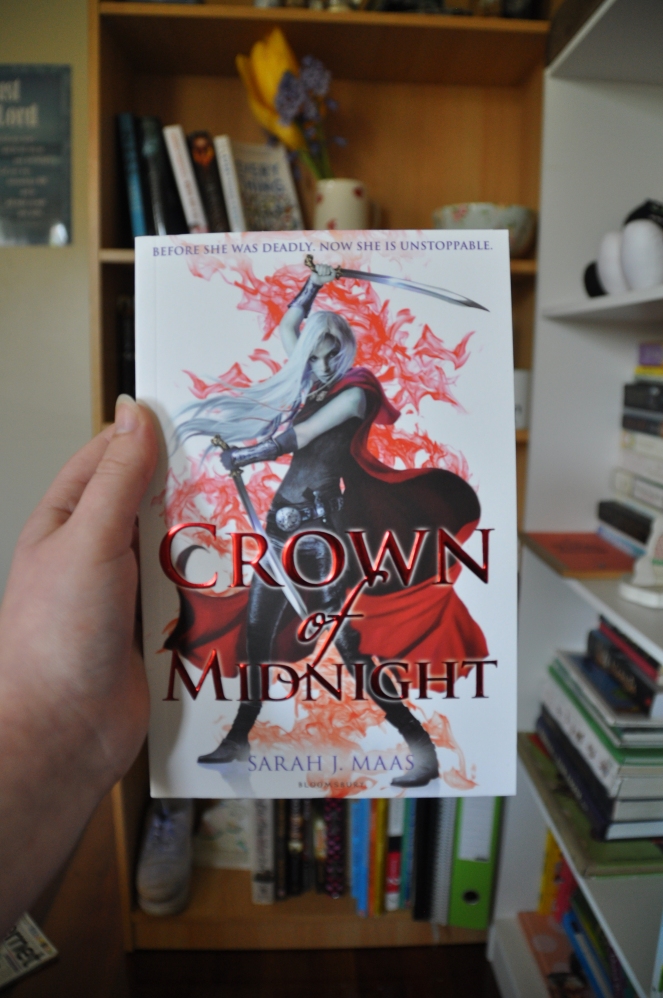 Basically I only bought this because it was $9 at Kmart and I have the first and third book in the series.  Granted I do need to re-read the series now that Queen of Shadows (#4) has come out and I never actually got around to reading Heir of Fire (#3) so maybe I’ll bring this series on my November cruise. I remember that I really do love this series (well the two books I’ve read so far) and that I totally ship Chaoleana ( Chaol and Celaena)! Also I love the U.K covers of these, I know the American covers are like colourful and stuff, but I think the white is just so much better.

“After serving out a year of hard labor in the salt mines of Endovier for her crimes, 18-year-old assassin Celaena Sardothien is dragged before the Crown Prince. Prince Dorian offers her her freedom on one condition: she must act as his champion in a competition to find a new royal assassin.

Her opponents are men-thieves and assassins and warriors from across the empire, each sponsored by a member of the king’s council. If she beats her opponents in a series of eliminations, she’ll serve the kingdom for four years and then be granted her freedom. Celaena finds her training sessions with the captain of the guard, Westfall, challenging and exhilirating. But she’s bored stiff by court life. Things get a little more interesting when the prince starts to show interest in her… but it’s the gruff Captain Westfall who seems to understand her best.

Then one of the other contestants turns up dead… quickly followed by another. Can Celaena figure out who the killer is before she becomes a victim? As the young assassin investigates, her search leads her to discover a greater destiny than she could possibly have imagined.”

by Amie Kaufman and Meagan Spooner

Okay let me start out by saying that this is such a pretty cover!  Secondly, it’s set in outer space, thirdly there are no (to my knowledge) aliens.  With that being said I AM SO EXCITED TO READ THIS! I’ve been wanting a book like this for a while and the premise is really good.  Most of the reviews by my Goodreads ‘friends’ are five stars so I’m excited to read this one. Also I really enjoy books where the characters are almost opposites.  It creates a better dynamic for a protagonist couple in my opinion.

“Luxury spaceliner Icarus suddenly plummets from hyperspace into the nearest planet. Lilac LaRoux and Tarver Merendsen survive — alone. Lilac is the daughter of the richest man in the universe. Tarver comes from nothing, a cynical war hero. Both journey across the eerie deserted terrain for help. Everything changes when they uncover the truth.

I first heard of this book through abookutopia‘s YouTube video (which I just linked, just click the word video).  It’s set in an interesting sounding world that I’m excited to explore, especially given that right now I’m in a assassins and vigilantes so this looks right up that alley! It’s a dystopian re-telling (or as the author puts it ‘homage’) to The Scarlet Pimpernel which I have not read or ever heard of.

“History has a way of repeating itself. In the Sunken City that was once Paris, all who oppose the new revolution are being put to the blade. Except for those who disappear from their prison cells, a red-tipped rook feather left in their place. Is the mysterious Red Rook a savior of the innocent or a criminal?

Meanwhile, across the sea in the Commonwealth, Sophia Bellamy’s arranged marriage to the wealthy René Hasard is the last chance to save her family from ruin. But when the search for the Red Rook comes straight to her doorstep, Sophia discovers that her fiancé is not all he seems. Which is only fair, because neither is she.

As the Red Rook grows bolder and the stakes grow higher, Sophia and René find themselves locked in a tantalizing game of cat and mouse.”

Okay, so I’ve posted about this book and The Elemental Trilogy A LOT lately, it’s not because I love it.  I haven’t even read the first book The Burning Sky yet.  But I was interested in the series, ordered the first book, then entered a competition and WON the third book, The Immortal Heights. So I’ve been pretty excited and talked about it a lot.  I’m actually not going to read any of this series until I have the third book so I can marathon them and do a bulk review.  Also I love these covers, they kind of remind me of the Divergent series covers.

“It all began with a ruined elixir and a bolt of lightning.

Iolanthe Seabourne is the greatest elemental mage of her generation—or so she’s been told. The one prophesied for years to be the savior of The Realm. It is her duty and destiny to face and defeat the Bane, the most powerful tyrant and mage the world has ever known. This would be a suicide task for anyone, let alone a reluctant sixteen-year-old girl with no training.

Guided by his mother’s visions and committed to avenging his family, Prince Titus has sworn to protect Iolanthe even as he prepares her for their battle with the Bane. But he makes the terrifying mistake of falling in love with the girl who should have been only a means to an end. Now, with the servants of the tyrant closing in, Titus must choose between his mission—and her life.”

I know I already own a copy of this book, but I love this series so much and the first two books (Beautiful Disaster and Walking Disaster) are my favorites (I’m including The Maddox Brothers series in this) , I just love Abby and Travis’ relationship! So I decided to buy the hardcover signed copy of Walking Disaster (I’m ordering the hardcover signed copy of Beautiful Disaster soon). 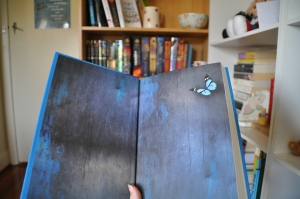 Isn’t the inside bit (whatever it’s called) so pretty! 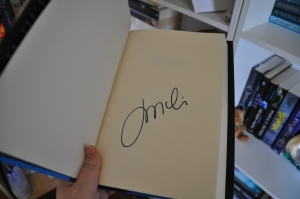 Ehh! There it is, the lovely signature of Jamie McGuire!

“Can you love someone too much?

In Walking Disaster; the life of Travis is full of fast women, underground gambling, and violence. But just when he thinks he is invincible, Abby Abernathy brings him to his knees.

Every story has two sides. In Beautiful Disaster, Abby had her say. Now it’s time to see the story through Travis’s eyes.”

(Sidenote: I can never get a photo of this cover, I tried like 10 times and each come out blurry.  It was the same when I was trying to take a picture of the paperback cover!  So weird.)

What new books have YOU bought lately? 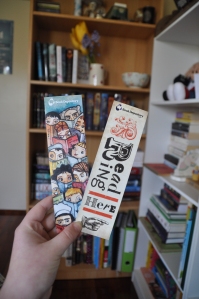 Well, that’s my book haul for today.  I actually get paid tomorrow so I’ll be placing another Book Depository order, and I have a few books either still in the mail or pre-ordered.  I might even head up to my local second-hand bookshop.