Here’s an oldy that never ended up getting posted.  Trying to flush out my vault of drafts so I’m not backlogged when I get back onto a normal blogging schedule.  Sorry if there are any mistakes; it’s been awhile since I wrote this one.

Okay, so if you don’t know what a book subscription box then;

This box is similar to The Book Candy Box in that it is solely focused on Romance, is aimed at an older target audience compared to boxes like Owlcrate and FairyLoot which are aimed at Teens and YA.  Again, similarly to The Book Candy Box, I have no idea what month this box is for.  While this is more about the swag and stuff this box also features a few extra ‘goodies’ that are more suited to the target audience. So let’s get started!

First up let me just say that the packaging for this box is so much nicer than that of The Book Candy Box, I’ve mentioned this before but I feel like how the product is packaged says a lot about the care put into making the box.  And while Adult subscription boxes are odviously less about the bells and whistles it’s still nice to be able to see the care given to each box.  However there isn’t an Information Card which, as  reviewer, is something I typically prefer to have included in boxes, even if just to have a list as a reminder of what actually came in the box. 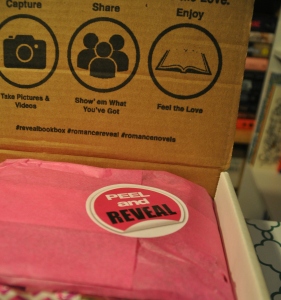 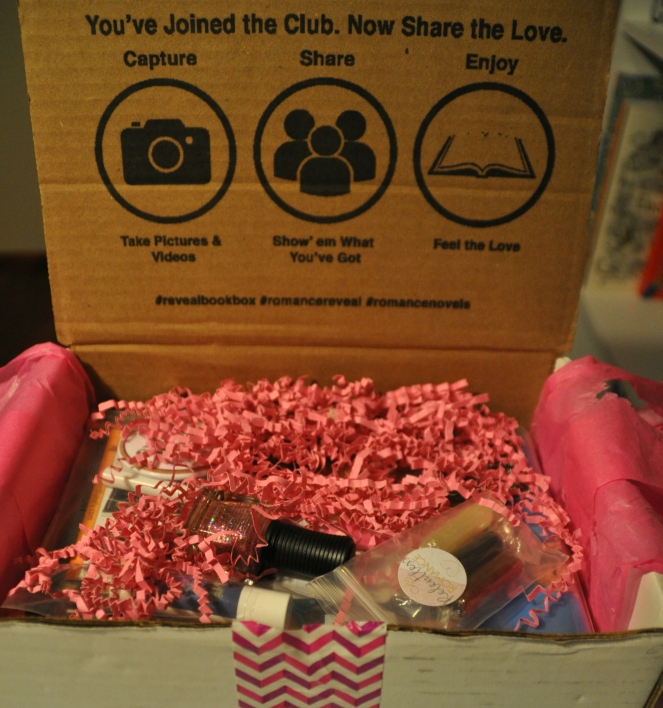 How pretty does this look, I have a soft spot for pink so this just made me very happy. Weird but yeah. 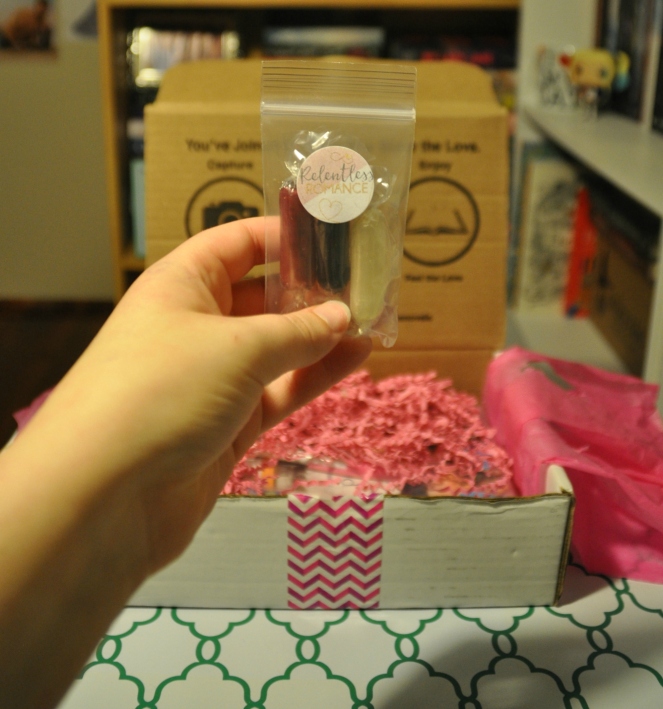 First up we have this little pack of lollies, I haven’t tried them yet so I don’t know what they taste like.  But they’re hard candies and I love lollies so I’m sure I’ll love them! 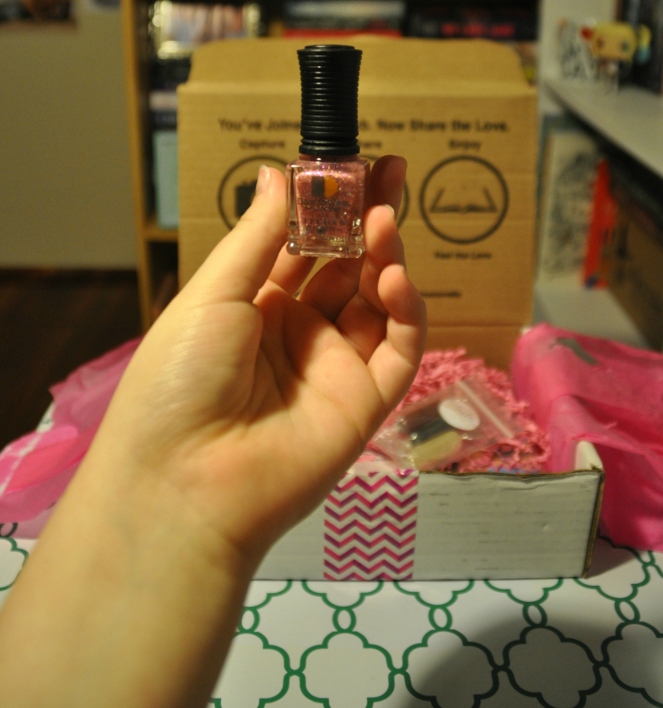 Next up we have this Dare to Wear Nail Lacquer by Lechat in Ice Princess. This is basically just a pink glitter clear coat nail polish.  I don’t know if the formula is good, how long lasting it is, or any of that.  But it is super cute because it’s pink and glitter which are two things I love and I’m sure I’ll be using this a lot in the future. 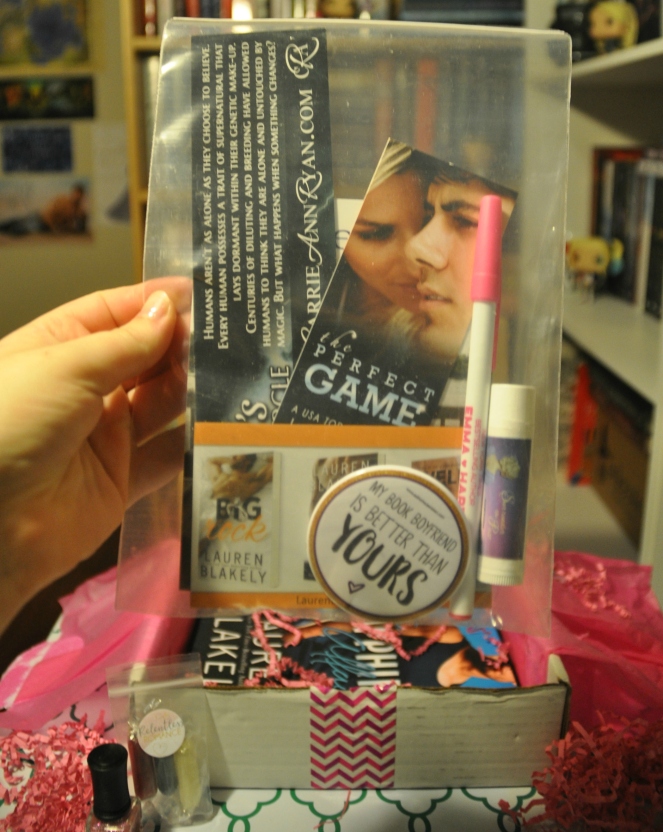 Up next there was this pouch pack full of goodies, while this makes sense given how the box is packaged to stop things going all over the place I do wish it hadn’t been done this way as it sort of took the mystery out of the box.

The first thing I pulled out of the bag was this adorable ‘My Book Boyfriend is Better Than Yours’ pin.  I like that’s it’s larger than some pins and I really like this.  I’m thinking of putting some pins on one of my book totes so I’m sure this will take centre stage.  It says its swag from www.authorharpersloan.com but that doesn’t mean it’s purchasable, so sorry about that.

Then I pulled out this Emma Hart biro pen.  Now it’s no lie that I love Emma Hart and even though I recently received and Emma Hart pen, it’s a different pen to this one so I’m super happy it was included in this box!

Then I pulled out this little lip balm.  I’m not going to lie I did open it and use it before I took the photo. The label says ‘Surrender to the Past – Elizabeth Johns‘ so it is book merchandise.  It has a peppermint flavour to it that makes my lips literally tingle so it’s fun to put it on.

The last of the non-paper swag was this magnet for LaurenBlakely.com. This isn’t as pretty as some of the magnets I’ve received.  But it doesn’t matter that much I guess given I don’t have my own house and therefore cannot put my magnets on the fridge.

First up for the paper swag we have this bookmark for The Perfect Game by J. Sterling.  On the back it has a quote from the book which says “It’s not that I can’t live without you.  It’s that I don’t want to. – Jack and Cassie “.  I think this is one of the better bookmarks I’ve received so I’m pretty happy with it.

Next we have another bookmark, this is for Dante’s Circle by Carrie Ann Ryan. The quote on the first picture says ” Humans aren’t as alone as they choose to believe. Every human possess a trait of supernatural that lays dormant within their genetic make-up. Centuries of diluting and breeding have allowed humans to think they are alone and untouched by magic.  But what happens when something changes?” I will admit the bookmark itself is kind of ugly, but the quote has made me curious. On the back it just has a line of the published books in the series (I presume).

This is the next and last thing in the little plastic baggie, it’s a signed blurb card.  I think this is actually a pretty smart idea for promoting a book.  In saying that the image used s the cover is kind of crap.  Like it’s a fine picture, but it’s not a cover image.  It doesn’t pull me in and as much as we say ‘don’t judge a book by it’s cover’ it’s a natural habit.  It’s for the book I Never Dreamed by Ashley Hampton.  On the back, as I said, it has the blurb (I’ll include it below).  While I like the idea of a Blurb Card, this one did nothing for me.

Heartbroken.
Once was enough.  I’ll never give my heart to another again.  One night with a woman is enough for me now.  As  psychologist, I deal with emotions all day long.  Life gets messy when emotions are involved, and I like my life uncomplicated.
D. Lynsey Henderson intrigues me.  Her smile makes my heart skip a beat. I want her in my bed, but she isn’t proving to be an easy conquest.

I finally have everything I dreamed about since I was a kid.  Well, almost.  I have the best job as a pediatric orthopedic surgeon, and I live in a beautiful historic home in a quaint small town.  I’m missing someone special to share my life with.  Someone special to love.  The last time I tried was a colossal disaster.
My path crossed Dr. Nate Roman’s multiple times at work.  He is beyond gorgeous and just the kind of guy I swore I’d stay away from…. he has a different girl every night, and I’m not going to be one of many.
He is so damn sweet when he tries to convince me to go out with him, and I don’t know how much longer I’ll be able to resist.

I’m not sure if anyone else agrees that it just doesn’t sound interesting.  In fact what’s written in this blurb is choppy and while it makes sense it doesn’t flow.  If that’s any indication of the book than I’m not interested in reading it.

The Sapphire Affair by Lauren Blakely (Adult Contemporary Romantic Suspense). I actually saw some hype about this book so I’m really happy it was included in this box and I’m excited to eventually read it!

Bounty hunter Jake Harlowe knows how to track a criminal. So when a group of swindled shareholders hires him to trail their former CEO, Jake expects a quick trip to the Cayman Islands to close another case. Until a devastatingly beautiful woman gets in the way.

Steph Anderson is visiting the Caymans for a rock climbing and dive trip—or so she tells Jake. She’s really trying to find out whether or not her stepfather embezzled money from his company. The last thing Steph needs is the distraction of a sexy, charming man whose kisses drive her wild.

Soon, the pair discover they’re after the same target—and millions in jewels. While Jake can’t be certain Steph isn’t working for her stepfather, and Steph can’t be certain Jake isn’t after the diamonds for himself, they can agree the heat between them is intense, and neither can deny the passion for long.

But the morning after, Steph discovers that she just might have slept with the enemy, and now she’ll have to outwit him to get everything she needs…

It’s also signed by the author so that is so awesome!

Inside the cover I also uncovered one last bookmark. So that was pretty neat, it’s nothing special and is just an author bookmark – not highlighting any series in particular.

And for the second and final book….

Broken Love by Jillian Dodd (New Adult Contemporary Romance). This is actually the second book in a series, but it’s a series of standalones so that’s okay.  But its still skirting around those edges of what is acceptable to include in a book subscription box.

After years of crushing and many failed seduction attempts, Palmer Montlake had finally scored the sexy Cade Crawford. Both a little drunk when they got back to her place, they were frantic with need, their desire intense.
But as the night progressed, the hot-mess hookup morphed to sweet lovemaking.
The kind neither had ever experienced.

But they were destined for heartbreak.
She was his best friend’s little sister.
He was her talent agent.
And they were dating in secret.
When they got into a wicked fight and broke up, all hell broke loose.
The kind neither have recovered from.

Six years later, they still hate each other.
But the universe seems to keep throwing them together.
When they catch the bouquet and garter at a mutual friend’s wedding, sparks fly between them — their chemistry undeniable.

Will they get a second chance? Or will they be left with a broken love? 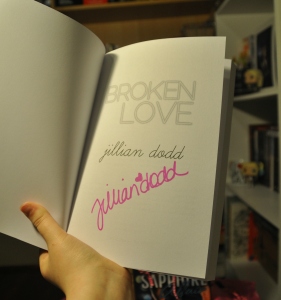 This book was also signed so, again, awesome.  I love having signed books, mostly because no authors come to Australia and when they do it’s not to Tasmania and I can’t afford to go to the Mainland…

I think this was an alright box.  I odviously prefer the YA book subscription boxes.  But out of the more adult ones this is probably my favorite one so far. For the most part the quality of the swag is better, it came with ‘other’ products, the contents of the box were presented nicely, and both books are signed.  Other than the Blurb Card I can’t really find fault in the products provided.  However for some reason, as I’m writing this, I feel this box was somewhat of a let-down.  I can’t say why since I have a book I really wanted, a cool pin, and a nice bookmark that I actually really like – but something just feels lacking.  It might just be  mood I’m in but yeah.  I probably wouldn’t order this box again, not because it’s bad but just because I can’t afford regular subscriptions of every book subscription company.  I’m just trying all the ones that appeal to me out and reviewing them.  In saying that, if I were looking for a Romance Book Subscription Box to regularly subscribe too – out of the two I’ve had so far this is the one I probably would order again.

You can order your Romance Reveal Box HERE for (starting at) $12.95 (plus shipping). If you want to check out past boxes you can click HERE.

The opinions expressed in this review are mine and mine alone.  This post is not sponsored I paid for the box myself.