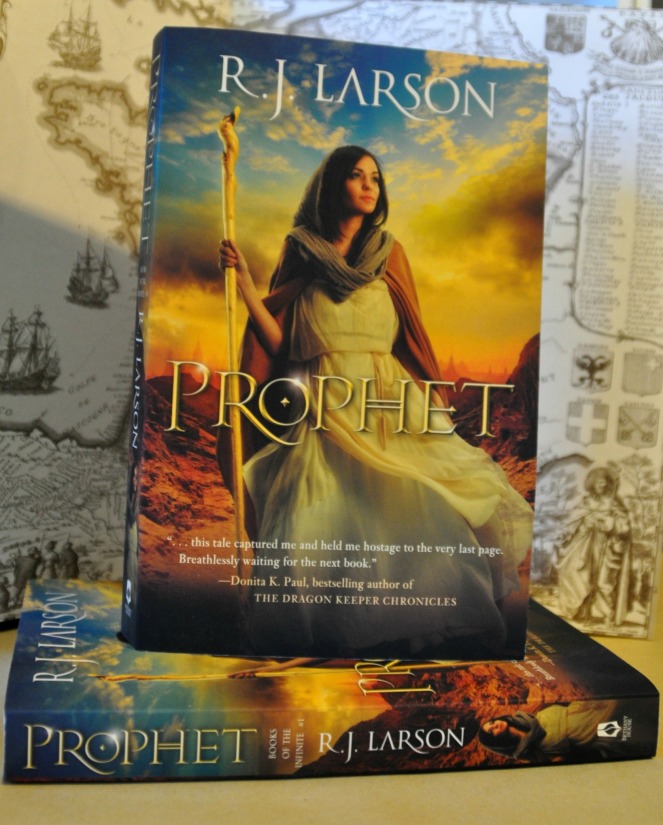 Series: Books of the Infinite

Additional Notes: Marketed as ‘Fantasy meets Old Testament‘. Stick around til’ the end because I’m giving away TWO copies of Prophet! (Giveaway CLOSED)

Ela Roeh of Parne doesn’t understand why her beloved Creator, the Infinite, wants her to become His prophet. She’s undignified and bad-tempered, and at age seventeen she’s much too young. In addition, no prophet of Parne has ever been a girl. Worst of all, as Parne’s elders often warn, if she agrees to become the Infinite’s prophet, Ela knows she will die young.

I’ve never been a big fan of Christian fiction – especially in YA. I find it’s very preachy and the plots are often weak.  As someone who has been a Christian all my life and thoroughly enjoys an intricate plot, this is somewhat of a bother.  When I came upon Prophet I had no idea it would become one of my favorite books, not only of the year, but of all time.  Yes it is classed as a Christian story, but it reads just like a high fantasy and to be completely honest I’ve seen similar ‘spiritual’ elements in many other popular YA fantasies.  What I mean by that is I personally think even those who aren’t Christians will find enjoyment from this book (and the series).  I didn’t find it preachy, I found the plot and characters to be well crafted and the world to be well researched.

The story begins with Ela, a seventeen year old girl from a small city called Parne, being called by her Creator, the Infinite (God), to be His Prophet and bring His word to a nation that has not only turned their backs on Him but has begun worshipping false gods.  The theme of ‘false gods’ is continued throughout this trilogy, and each situation was delivered in a different way and heeded different results.  I know I said it doesn’t sound preachy and that what I just wrote makes it seem so, but the plot and writing grip you so tight you don’t even notice – and it all plays a part in the development of the characters and the plot.  It isn’t needlessly included – it holds purpose.

I found Ela to be an incredible character, as the story progresses we see her grow both in her faith and in who she is as a person.  When you think of Prophets’ you think of old men who are filled with wisdom and don’t make mistakes.  But Ela is a teenager, she doubts herself, she makes judgements and doesn’t always put her trust in her Creator – she’s flawed and Larson uses those flaws to help her character grow.

“I know the Infinite’s voice because He tells me everything I don’t want to hear, sends me where I don’t want to go, and asks me to fulfill tasks I consider impossible. Above all, He is forever right.”

Kien was also a great character and while Ela is categorically the ‘main character’ Kien goes through more character growth throughout the series than she does.  He is from a nation of people that don’t have any belief system, he often finds himself questioning Ela’s sanity and not really believing what he see’s Ela do or what she says.  I found him to be a wonderful ‘Book Boyfriend’, I found myself laughing a lot when it came to what he said and I loved how he treated Tzana, Ela’s disabled younger sister.  The romance isn’t in your face with this series – it wouldn’t be appropriate or proper for them to do much with one another – but it is there and it’s quite sweet.

“Because He loves us. And love does not demand enslavement, but… love desires a partnership. Our Creator seeks true communication between us and Him. He won’t force anyone to love Him. We decide for ourselves.”

I can’t lie, one of my favorite supporting characters was Scythe/Pet.  He was such a pleasant addition to the group – despite being a breed of horse literally called Destroyers.  Throughout the series he misbehaves a lot and causes quite a few problematic situations for his masters, which I found to be hilarious. Tzana was also wonderful character, I personally have the belief that those who have disabilities are able to sense His presence more than others and the role Tzana plays in Ela’s story fits into that.

As for the world, while I’m no expert I do love history and I know a fair bit about ancient history, I found Prophet to be culturally in tune with pre-Christian cultures.  The way people lived, the clothes in which they wore, the social customs, the landscape.  For me this is really important – as I said I love ancient history and it tickles me pink to see Bible stories told in a different context.  It’s definitely like a Old Testament world.  And we know it’s set in a BC world because of something Ela say’s in the final book King:

“Sacrifices offered by mortal priests are also imperfect. Perfection requires faultlessness and, someday, the Infinite will provide a perfect sacrifice for us all. Until then, we wait and trust Him as children trust their father.”

I won’t say too much about the plot because I don’t want to spoil the story, but it’s a great adventure, there is a fair bit of fighting, and (to my great relief) this isn’t a fantasy story where they’re reclaiming the crown for some lost princess or any of that nonsense- it feels more realistic in both the plot and the characters goals.

I highly recommend this series to all YA Christians (and adults too) and if you enjoy fantasy and aren’t a Christian I’m positive you’ll enjoy this book/series.  As I said in the beginning there are very few Christian YA stories I enjoy and I didn’t just enjoy the Books of the Infinite, I loved them! Even months on from first reading it, and having re-read the series, it’s still as incredible as my first read through and a particular scene at the end of chapter 2 and beginning of chapter 3 always makes weep (not from sadness, I just feel overwhelmed by God’s love and His presence when I read this scene).  I honestly can’t stop raving about this book and this series.  Plus at the end of each book there are discussion questions, which I really like – it creates discussion and provokes thought cementing the story and characters in our minds (and hearts).

“I’ve never been without you, she realized aloud, her voice breaking. Never.”

Add it to your Goodreads Shelf: Prophet

To go along with this review I’m giving away TWO copies of Prophet by R.J Larson!

Have YOU read Prophet?