Let me just start out by saying that I am incredibly confused as to why they chose to do the entire Justice League instead of continuing to do individual founding members of the League.  Maybe it was because the Justice League movie came out on DVD around this boxes release?  I was honestly expecting Superman, The Flash (Barry Allen), Green Lantern (Hal Jordan), Aquaman or Martian Manhunter.  Instead we get the entire League; I’m not necessarily complaining.  But there’s something in me that is irritated by this on a fundamental level…

For those of you who don’t know World’s Finest: The Collection is a quarterly subscription service created by CultureFly featuring exclusive licensed DC Comics items.  This is not a book subscription box, or even a comic subscription box.  It is an item focused box fitting around a theme.  Their first box was Batman then they did Wonder Woman.  This box, Justice League, is the third box.

You can read my unboxing/review of the Wonder Woman box HERE.

Now about the actual box, I did see spoilers and I knew that I wasn’t going to be as excited about this box as I was the Wonder Woman box.  Don’t get me wrong, I still love everything, but in my conclusion I’ll explain my thoughts and reasoning.  Now, lets get into this unboxing! 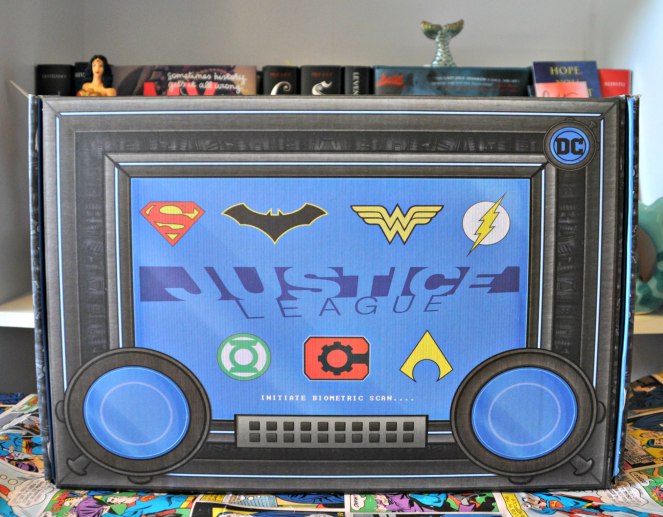 The box itself is sturdy and strong, it came wrapped in plastic so it wasn’t damaged at all!  I did prefer the Wonder Woman box art, but I still love this and think it’s so cool.  I love that they boxes are so nicely designed because it means I can use them to decorate my shelves.  Which sounds weird, and probably is, but you can store things in them (like things you want to keep but have no use for currently) and reuse them.  So it’s like an extra item in-itself. 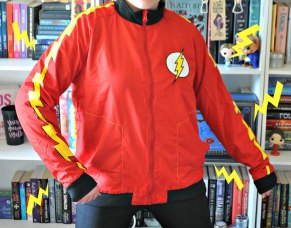 The first item in the box, and by far the most important is the Flash x Reverse Flash jacket.  You can wear red and be Flash or yellow and be Reverse Flash, and how do you change them?  BY REVERSING THE JACKET (turning it inside out).  So it’s like a play on words?  Get it?  I love it, when I saw the spoiler World’s Finest released on their Instagram I cracked up because I thought the joke was hilarious.  Maybe I’m just weird but I thought the concept and product were brilliant! Anyway, I love the jacket, it’s warm.  The Flash side feels like it would hold up alright in the rain (not downpour but light shower) and the Reverse Flash side is softer.  I’m not sure how the decals will hold up in the wash.  It’s officially my favorite wearable item in my possession.  (Also can we appreciate my amazing editing skills for the photos?)

Next up we have this Wonder Woman Lasso of Truth charging cable.  This was an item I saw through spoilers and immediately felt let down by, but upon receiving it all my worries faded away.  See, in the spoiler I saw I didn’t see the multiple charger ends, I only saw one and it wasn’t compatible with my phone.  But this charger cable has THREE connections! 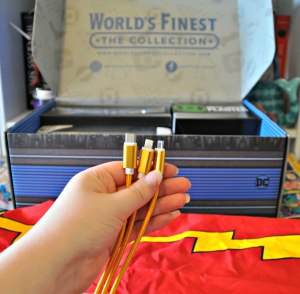 So I’m very thankful that they thought to accommodate more than just iPhone users, which I’ve seen happen oh too often.  This product really is awesome, the cord is fairly long too, so it has a nice reach.  And in theory you could be charging three devices at once.   Which is pretty cool. 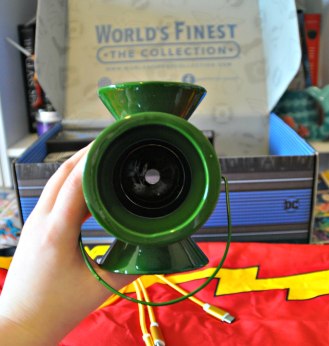 Up next we have this Green Lantern planter.  I think this is a really cool item, and while it’s marketed as a planter you can use it decoratively, as a paper weight or as a pencil holder!  Surprisingly versatile! I personally am using it as a pencil holder because I have a black thumb and cannot grow anything.  I’m curious to hear how others are using it, let me know in the comments below how you would use this Green Lantern planter.  It’ll be interesting to see what kind of lantern product they’ll include when they do a Green Lantern box, if they’ll include an actual lantern item or now that they’ve featured it in the Justice League box they won’t revisit it.

Continuing, we have a full set of Justice League member pins.  They’re strong, heavy, durable.  I’m scared to actually use them in case I lose them (typical of me). 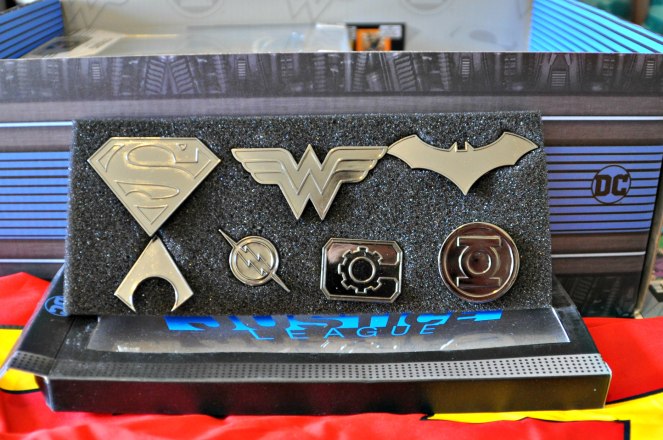 I like each design, though I’m a little mad that we have Cyborg but no Martian Manhunter.  Maybe I’m a little old school that way. 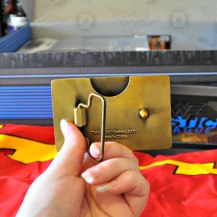 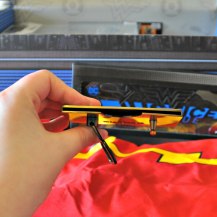 Up next we have this belt buckle card holder.  Now this is an item I think is soo cool, but can’t actually use….. I don’t really wear belts, and when I do they don’t have a connection like this, no removable buckle.  Which is a bit disappointing, however I’m going to hold onto it and my future husband will receive it one day and think I went to a lot of trouble to find him a wonderful, nerdy gift.  When in reality I’m a hoarder and won’t let go of things I like even if I don’t have a use for them.  Hopefully they’ll include another card holder item in the future, because I really like that idea.

Second to last, we have our vinyl figure.  They included Cyborg in all his mechanical glory for this box, and while I am disspointed that they’re odviously not doing the original founding members, I can’t complain too much because I do think he’s pretty cool (both the character and the figure). 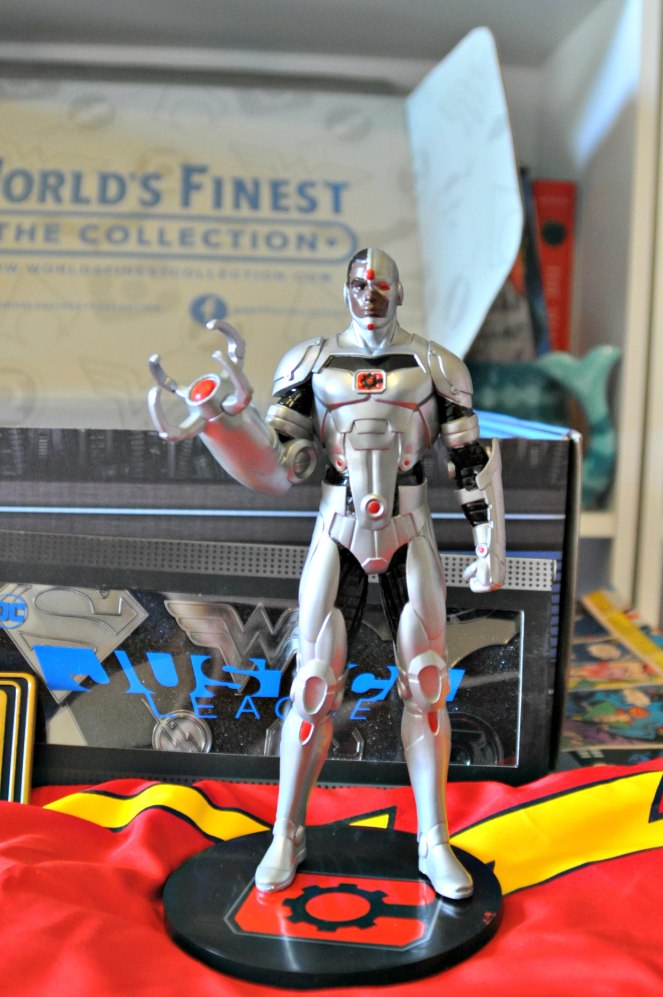 I didn’t notice with the Wonder Woman vinyl figure, but on the back of the boxes they include a little bio about the character, in this case Victor Stone.  While I already knew his backstory it’s still a cool little addition.  I like that they’re including something like this in each box, a collectible figure exclusive to their box.  I am however upset that I’ll never have the full set given that I missed out on the Batman box.

Lastly we have this wooden/canvas print of Clark Kent doing the thing with his shirt and bullets flying all around. I like this picture, but to be completely honest I don’t have much use for a canvas print like item.  I’m keeping it, don’t get me wrong.  I just prefer the more usable and collectible items in this box rather than completely decorative.  It was a struggle to find it a home in my room, and I’ll probably put it away in storage in a few months anyway.  The finish and art are really nice though!

And so that concludes our World’s Finest: The Collection Justice League unboxing.  I did love this box, I want that to be clear, I just didn’t love it as much as I loved the Wonder Woman box and the unboxings I saw of the Batman box.  I think it was because the jacket took up a lot of room, and I’m sure that was and is supposed to be the focus item.  The item that had the most thought put into it.  I still love the usability of the items CultureFly include in their boxes.  Instead of having products that sit collecting dust, go into storage or are given away because they’re useless, we get items that can be used on an almost day to day occasion.  I said in my Wonder Woman unboxing/review that it was refreshing, and that still stands.  My favorite item was odviously the jacket but I also loved the Lasso of Truth charger cable, I thought that was a really cool idea.  My least favorite item is probably the Superman canvas if I’m honest, I just don’t have much use for it. I will 100% be keeping this subscription, and to all my comic book loving readers I highly recommend this box for the content and quality of the items included. 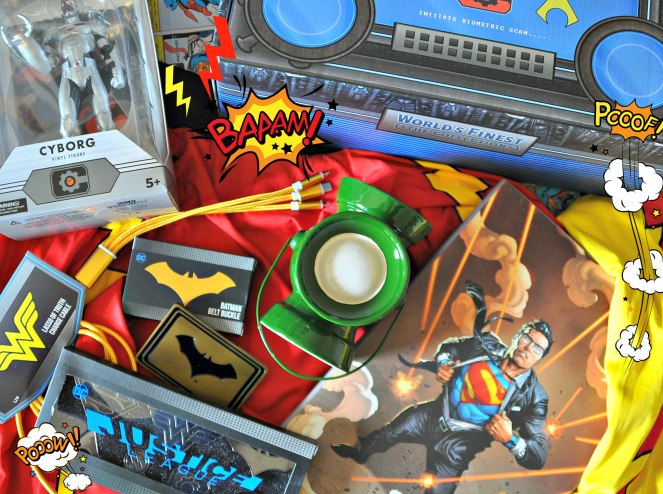 You can order your DC World’s Finest: The Collection box HERE for $48.99 USD (not including shipping). If you want to check out past boxes click HERE.

Take your guess; who will be featured as the theme for World’s Finest: The Collection’s next box?

My bet is on Superman.

The opinions expressed in this review are mine and mine alone.  This post is not sponsored, I paid for the box myself.

One thought on “Subscription Box Review: World’s Finest The Collection”