I’m not usually a big fan of Middle Grade, however there is one big exception; Rick Riordan.  So when OwlCrate Jr. announced their April theme was ‘Myth & Might’ and that it was perfect for fans of Rick Riordan, and Percy Jackson and the Olympians, I knew I had to get this box.  I also had a strong idea as to what the book was and it was the first in a new endeavor by none other than Riordan himself (or technically Disney Publishing, but it’s with Riordan).  So the box was ordered, and shortly after I unsubscribed so I didn’t end up ordering the May box, then the wait began.  I was so excited when this box arrived at my door, and I’m still really excited about what I uncovered in this box (though I have some hesitations/reservations, which I’ll get to a bit later).  If you were’t aware, OwlCrate is a YA book subscription box company and they have a MG book subscription box for younger readers.  I’ve seen a lot of unboxings and they all look incredible.  So if you have an 8-14 year old they might really enjoy this box!

Without furthur ado; the unboxing!

As always we start with the box itself; unfortunately this box was a little banged up.  It’s still really sturdy (just like with the normal OwlCrate boxes) and I’m honestly surprised it got banged up.  It must have been a really rough transit, so no fault of the company.  But given it’s likely to be my only box from OwlCrate Jr. (unless they do more mythology based boxes) it’s a little disappointing.  It’s still displayed right where you see it in this photo though.

The intro/spoiler card is pretty cool too, it has elements of a few different mythologies represented.  I might be wrong, but I believe from top to bottom it goes; Egyptian, Norse, Greek, Hindu, and I have no idea for the last one.  The flip side isn’t as themed but it’s clear and easy to read. 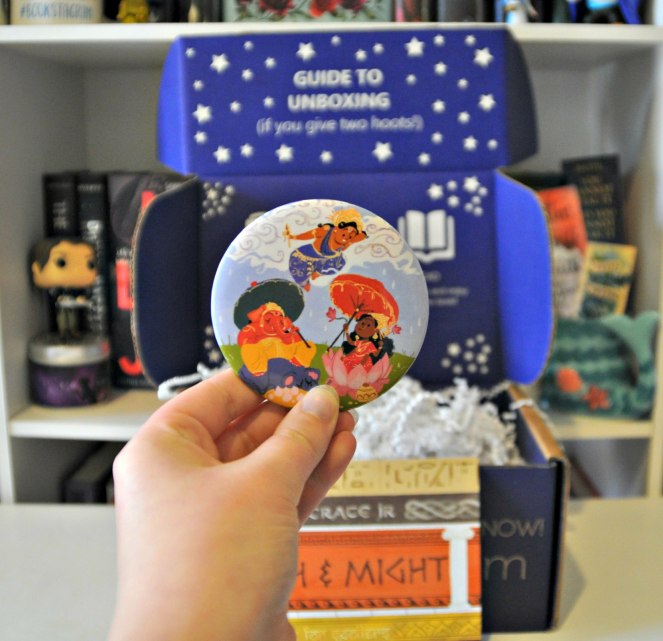 The first item I picked up in this box was this little pocket mirror featuring Ganesh, Lakshmi and Indra.  Three of Hinduism’s most important deities.  I personally will not be keeping this pocket mirror, but it’s been added to my giveaway pile (keep an eye out in the coming months for something exciting!).  The art is really good though, I love the art style. 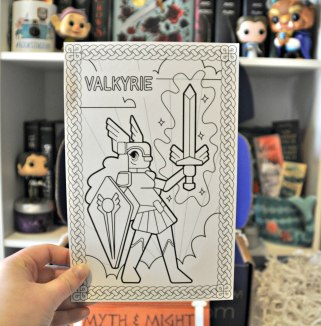 The second thing I pulled out of the box was this cool Norse mythology crossword puzzle and Valkyrie colouring page (activity sheet).  I can’t lie; although the crossword was easy – the words were so long I started to get a bit confused.  And I can’t wait to colour this in! Apparently there’s a colouring competition OwlCrate Jr are running on their Instagram!  Check out the hashtag #ocjrmyths to see all the amazing entries. 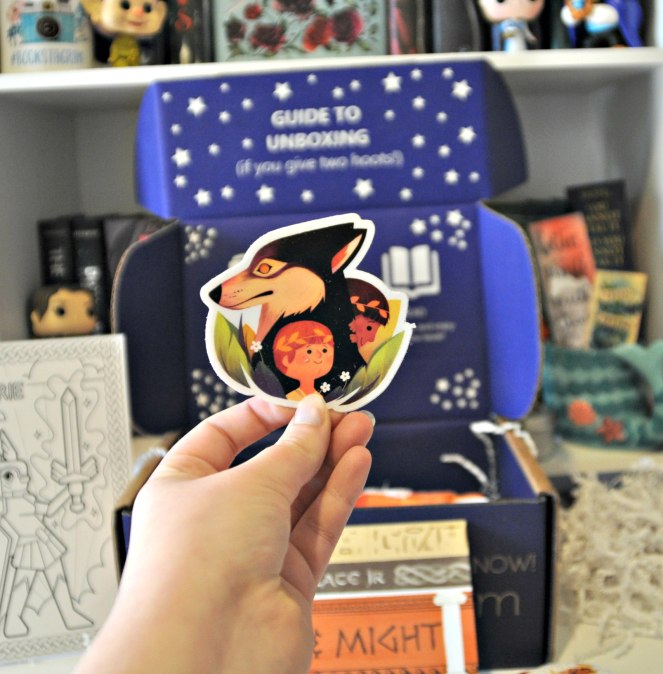 Up next we have this little Romulus and Remus sticker.  I loved that this is what OwlCrate Jr decided to use to represent Rome.  I love the story of Romulus and Remus, I did when I was studying Ancient Rome in my Ancient Civilizations class in high school, I loved it when I went to Rome and saw the sculpture, and I still love it now.  If you didn’t know Romulus and Remus were twin brothers in Roman mythology who were raised by a wolf and grew up to be the founders of the city of Rome.  I think this sticker is so cute, and as the spoiler card says: “Who knew the founders of an ancient empire could be so cute??” 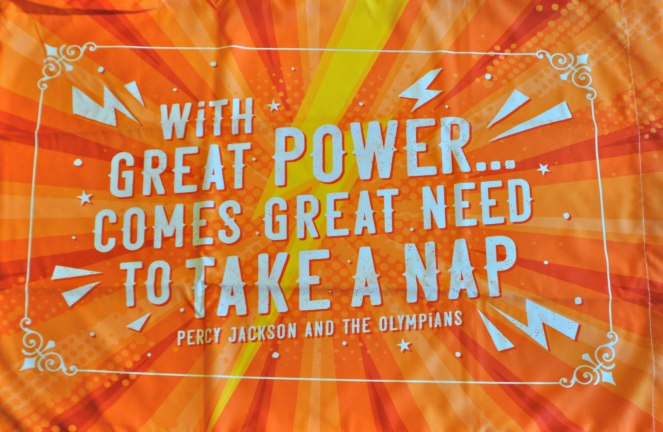 Now for my favourite item; this Percy Jackson inspired pillowcase!  And from what I can tell the quote itself seems to fit well with the story of the book included!  “With great power… comes great need to take a nap.” I love this pillowcase, I think the colour is so bright and fun and very Camp Half Blood.  And the quote is so appropriate for a pillowcase.  I only wish I had ordered two of these boxes so I could put one of these pillowcases aside for any of my future children (I could still, but I don’t have that kind of money).  It’s also really soft!  I haven’t used it yet, but I know it’ll lead to a wonderful nights sleep, and dreams full of adventures and quests! 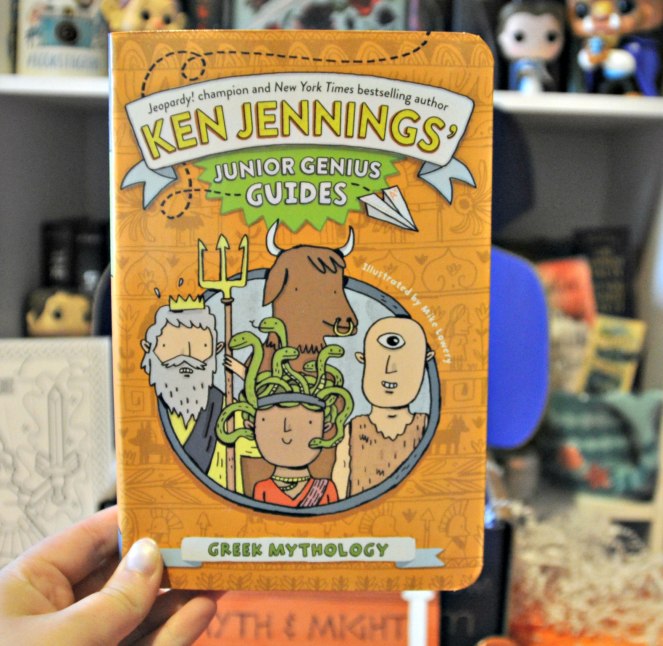 Up next we have this Junior Genius Guides: Greek Mythology book by Ken Jennings’.  I have a lot of books like this, but I’m always happy to put another one in the pile, and I can’t wait to read it and see if I learn anything new!  I’m such a nerd with these things, I have like 5 ancient history and Greek mythology text books in my collection.  Also I’m guessing that this book/guide will be funny since the spoiler card says it’s ‘hilarious’.

And this month’s book is…. 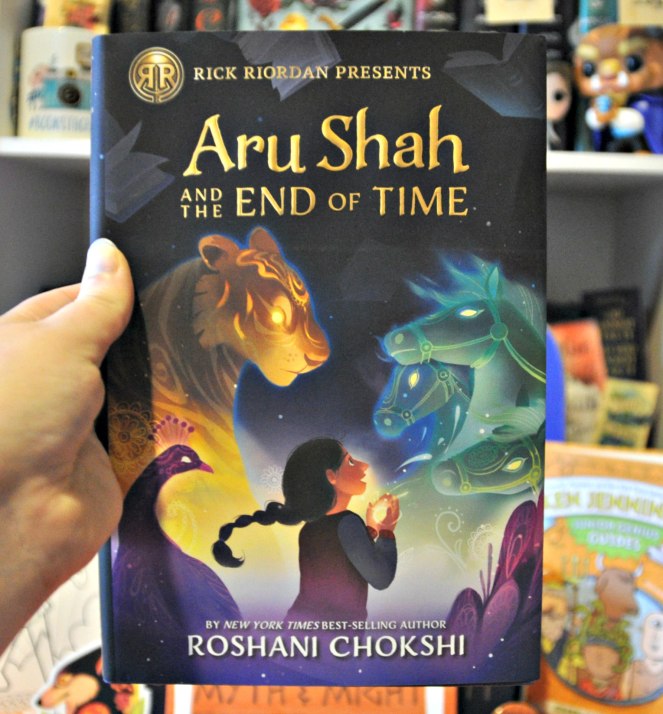 Aru Shah and the End of Time by Roshani Chokshi (the first book in the Pandava Quartet)!  This is the first book in Rick Riordan’s new Imprint with Disney’s Publishing Press, Riordan Presents.  The books published under this imprint will feature ancient mythologies in a modern day world, much like Rick Riordan’s books.  Originally, when Disney approached Riordan about this imprint, it was to create an extended universe within the Percy Jackson world.  However Riordan decided it wouldn’t be an extension of his world, instead the imprint’s primary purpose would be to bring other aspiring writers to the attention of Riordan’s audience by using his brand name. All the books in the imprint series are children’s books that focus on mythology in the modern age.  Riordan has final say over the books chosen to be included in this imprint and will review proposals and manuscripts, and also serve as editor for the acquired books.  (information sourced from the Riordan Wikia) Aru Shah and the End of Time is a Middle Grade Mythology Adventure following Indian/Hindu mythology!

Twelve-year-old Aru Shah has a tendency to stretch the truth in order to fit in at school. While her classmates are jetting off to family vacations in exotic locales, she’ll be spending her autumn break at home, in the Museum of Ancient Indian Art and Culture, waiting for her mom to return from her latest archeological trip. Is it any wonder that Aru makes up stories about being royalty, traveling to Paris, and having a chauffeur?

One day, three schoolmates show up at Aru’s doorstep to catch her in a lie. They don’t believe her claim that the museum’s Lamp of Bharata is cursed, and they dare Aru to prove it. Just a quick light, Aru thinks. Then she can get herself out of this mess and never ever fib again.

But lighting the lamp has dire consequences. She unwittingly frees the Sleeper, an ancient demon whose duty it is to awaken the God of Destruction. Her classmates and beloved mother are frozen in time, and it’s up to Aru to save them.

The only way to stop the demon is to find the reincarnations of the five legendary Pandava brothers, protagonists of the Hindu epic poem, the Mahabharata, and journey through the Kingdom of Death. But how is one girl in Spider-Man pajamas supposed to do all that?

I do have a few reservations about reading this book as some of the themes and deities that are included in Hindu mythology are kind of touchy subjects in Christian and Jewish religions (of which I am part of).  It’s the magic and spiritual aspects that clash a bit.  I actually have an Indian cousin who is identifies as Hindu so I can view reading this book as a way to connect and understand her more.  I love learning, and I do have a way of approaching books that have elements that go against what I beleive, so I’ll definitely read it.  Just whether I enjoy it is another matter, and if it makes me feel a bit icky I know I’ll put it down.  This may sound strange to someone who isn’t religious, but everyone has their own identity and what we decide is okay and right for what we believe, and we’re all allowed to honour and respect that without being judged.

As always we have a letter from the author and a signed book plate;

Think fast!  There’s a demon right behind you! Ok, fine.  I’m joking.  The only demons you’ll find are inside this book.  But don’t worry there’s more than just demons, there’s magic too… Flying horses and rude birds and stores where you can buy ripe (unknown word) like a bag of apples!
As a notorious liar, 12-year old Aru thought all the stories her mother told her were, well, stories. But when she’s forced to light a supposedly cursed lamp, she’ll discover that maybe there was more truth to those tales than she thought!
I wrote Aru for all the kids like me.  Kid’s who told tales to make their life seem more magical.  Kids who never saw their names or skin color front and center in a story.  Kid’s who wanted to be part of the tale.
I hope you all enjoy her adventures 🙂
And watch out for demons! 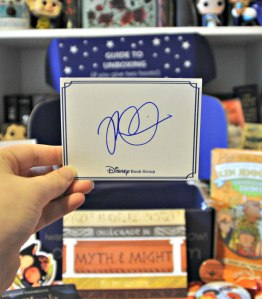 They also included something from the original ARC box that was sent out.  I remember seeing it and wishing I was a well known and popular blogger just so I could have received this box so I could have this item to go along with the book.

This eye mask.  A weird thing to want (I admit I didn’t want it as much I wanted the items included in boxes from Riordan’s books – however it’s pretty close contender) but I’ve never received an eye mask in any kind of box and it just seemed to fit the synopsis of the book and I had wanted it and now I have it!  It says ‘Don’t wake the sleeper!’.

Overall I loved this box, I enjoyed every item (even if the mirror is finding a new home).  Especially the pillowcase.  I love Percy Jackson and the Olympians, and this item is going to be treasured immensely.  I’m so glad I ordered this box and, despite reservations, I am excited to read Aru Shah and learn about the Hindu deities and mythology (is it accurate to refer to it as mythology, does the book deal with mythology which is different to the religion?).  I wonder if it’ll lead to any interesting conversations with my cousin (who is technically my father’s cousin and who hasn’t spoken to me since I was like 5).  Maybe it’s a reason to get in contact with her to discuss what I take from the story.  While this is likely the only box I’ll receive from OwlCrate Jr I know they have really high quality items and while they aren’t really by creators in the community, they’re still wonderful and fit the themes spectacularly!  I highly recommend this box for anyone with a young reader in the family, they always come with some kind of activity – and the cross word was actually really fun to complete (coming from a 21 year old)!

You can order your OwlCrate Jr. box HERE for $27.99 USD (not including shipping). If you want to check out past boxes you can click HERE and HERE.  And you can buy past boxes and books HERE (as of when I’m writing this post, April’s Myth & Might box is in the Past Items store).